How Many Countries Have Banned Plastic Items?

Plastic bans are a contentious issue. Most often, discussions about the use of plastic straws have drawn controversy, like in the case of U.S. state California, where a law requiring full-service restaurants to ask customers if they want to be served plastic straws has recently gone into effect. According to a report by the U.N., only 14 percent of countries in the world have banned or restricted single-use plastic items so far. Most often, the use of plates, cups, cutlery and stirrers has been restricted, followed by restrictions on plastic packaging and take-out packaging. Only two countries, Vanuatu and the Seychelles, have so far banned plastic straws outright. 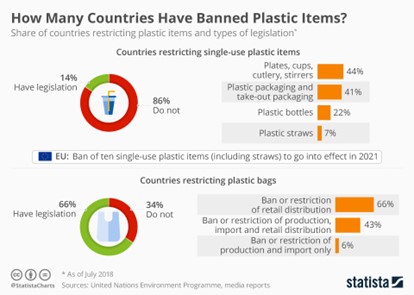 The list of countries banning single-use plastic items will grow longer in 2021 when an EU law will go into effect, banning plastic straws, cotton swabs, stirrers, cutlery and balloon sticks, among others. Many other countries and U.S. states and cities are also working on similar legislation.
Restrictions on plastic bags on the other hand have become quite commonplace around the world, with 66 percent of countries restricting at least some aspect of their import, manufacture or distribution.